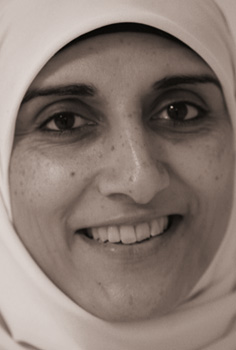 My name is Monna and this is my Testimony.

I live in Kingsbury. It’s right on the boarders of Wembley and so where I’m living now, the Wembley stadium can be seen from my bedroom window, so all the time it was being constructed, particularly when they were constructing the arch, I watched it as it was being built. And now when they light it up, it just looks beautiful.

I think it’s a real honour to have the Olympics in London. I think that’s the word I would use. I think, as we draw closer to the time, I think people will start to realise exactly what a big thing it is to have this here in London. And it’s a real opportunity for us to, sort of, welcome the world and be hosts in the true sense of the word. And I think that is something that will escalate in the next year or so. And then when we finally get to the year and start counting down to the opening ceremony, I think that will be so exciting. So it should be fantastic.

But having the Olympics here in London, in terms of making a difference for sport, I think it really will inspire people to think about being much more physical, as well as young people themselves, you know, taking the initiative and training already. Even without the financial backing, they’re doing it, so there is that movement from just watching something and thinking, “oh yeah it’s happening there,” to actually, “I can be a part of this”.

The opening ceremony, I would love to be there if not the closing ceremony, just to be involved in that in some way, would be great just- Even if it is just watching it- think it will be a fantastic event. But I think some of the long distance running, because of the stamina like you say, the actual- What people go through, no matter how you can watch it on TV, you really feel for the athletes- I think to watch it, you know, in real life, must just be amazing. So I think for me it will be the running events that I’d love to go and see.

It’s inspiring young people already now, like you say. In the schools there are projects and things that are, looking at the contribution you can make towards the Olympics and what will happen afterwards. And those young people- I mean, now it’s, sort of, a few years time they’ll be the young adults and they’ll be, sort of, you know, leading. So hopefully it’ll have inspired them as well.